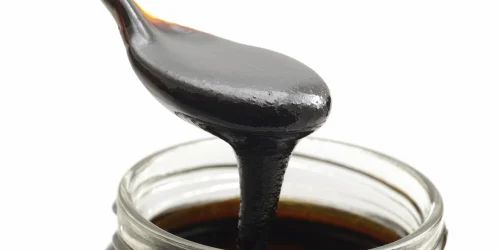 If you are a cooking pro, you better know that the signature flavor of Gingerbread Cookies comes from the secret ingredient, Molasses. The syrup is sticky, sweet, and the secret to the recipe. Most chefs and kitchens have been using Molasses for Christmas Deserts like Spicy Molasses Cookies, Gingerbread Thumbprints, and many more. Your presence in reading this post means you have run out of Molasses but want to prepare your favorite cookies, but you don’t have to worry about it. We are going to share a list of substitutes for Molasses. You can find Molasses Substitute according to your comfort.

You may don’t know, but Molasses is the byproduct of sugar making process. Be it Sugarcane or Sugar beets. When the manufacturer refines sugar, they boil the juices squeezed out of these plants to a syrupy mixture. Then, it is used to extract the sugar crystals. Hence, the byproduct that manufacturers have is the Molasses that is brownish-black.

What Is Light And Dark Molasses?

Companies boil sugar syrup three times, and each time, it yields different grades of molasses. The first one is light Molasses. It is light in color and flavor. The second byproduct is dark Molasses with a thick consistency and dark color. The last one is blackstrap Molasses. Read more about it in the next section.

As we told you, it results after the third boiling or says final boiling. Some people love that, but some hate the blackstrap Molasses. In some places, you may see blackstrap is reserved for doctoring fertilizer or livestock feed. However, it comes in ultra-high mineral content, but we advise you to avoid blackstrap Molasses with Subpar flavor for recipes.

Before thinking of finding the best Molasses Substitute, you must know about these too. When sulfur dioxide is added, it clarifies and lightens the color of the juice. But that will impart a different smell. Hence, you may go with Unsulphured Molasses for the original flavor and color.

What To Consider Before Substituting Molasses?

Molasses is the most influencing ingredient for most recipes. Hence, you must know the following crucial points before thinking to decide on Molasses Substitute.

While considering any ingredient as a sweetener, you must know that Molasses has its unique flavor. So, if you want to substitute, you must admit that the taste of your recipe will also change based on the new ingredient you use.

Most people also use molasses for its color, not only for the flavor. For making molasses bread, you can use honey too. But it’ll look different.

Molasses cats differently in your recipes when compared to using dry sugar. While baking, you know it is difficult to change the recipe and find out the best sticky sweetener. But you don’t have to worry about it if making BBQ.

Molasses, being a Hygroscopic, is a moisture magnet. Hence, you can understand why baked goods with molasses as an ingredient are moist, fudgy, and dense.

Some people are afraid whole thinking to use a Molasses Substitute, and that’s not even worst because it’s Molasses. If you have run out of Molasses and need to make dishes that ask for it, you can use the Substitutes of Molasses. If you don’t have Molasses handy, there is no way you have to replace it, even though for most recipes, it remains irreplaceable.

All these molasses substitutes, without any doubt, do not provide the same color and flavor as that of Molasses. However, still, they are worth adding as a sweetener while replacing with Molasses.

Do you know that brown sugar contains both granulated sugar and molasses? Yes, it does. Hence, if you want to replace your Molasses with brown sugar, it is one of the best substitutes for Molasses. Do not forget that its measurements will vary. A three-fourth cup of packed brown sugar can easily replace one cup of Molasses. If you choose dark brown sugar, it will be helpful to get the better Molasses flavor when you compare it to light brown sugar.

Honey tastes sweet with floral in flavor and golden in color. However, you can find countless type of honey in the market. It is totally up to you to select the best suitable Honey to replace Molasses. You can prefer deep-colored, deep-flavored, and any other type of honey according to your dish. There are no measurement variations because one cup of Honey can easily replace one cup of Molasses.

Have you ever tasted dark Corn Syrup? One of the best sweeteners that most master chefs choose is this dark Corn Syrup. You can say this is a combination of a specific type of Molasses and corn syrup. Hence, it will taste the same as using Molasses, and it also looks similar to that of your Molasses. You don’t have to vary the measure because 1:1 replacement is enough for you to substitute Molasses.

Do you know maple syrup tastes malty-caramelly? It is like honey and is available in various shades. If you want to substitute Molasses with maple syrup, you can go for the darkest maple syrup available in the market and near your grocery store. You must know it is much thinner than Molasses, and hence, you may reduce using liquid elsewhere if you find it with more water content. You can go for a 1:1 replacement while using maple syrup.

You may have heard about light treacle because another name of golden syrup is light treacle. Manufacturers prepare it from the evaporation of sugarcane that makes it lightly, golden, and tasty liquid, like honey. You can quickly replace Molasses with golden syrup, but do not forget to keep the measurements the same. One cup of Golden Liquid can substitute one cup of Molasses. Hence, it is another Molasses Substitute that you can prefer.

You may have heard about sorghum molasses. Yes, it is sorghum that we are suggesting you use to replace Molasses. It tells you all syrups are similar and are a product of cereal grains known as sorghum. It has its unique sweet and sour flavor but is slightly thinner than your favorite Molasses. Still, you can say one of the best Molasses Substitutes is sorghum. If you can find sorghum in your area, it will be a better substitute for Molasses.

Have you ever used Jaggery in a melted form? Jaggery is also the product of sugarcane and is prepared separately. Hence, it is not a byproduct of sugar. One of the core ingredients for many sweets is Jaggery. It has its unique taste, colors, and sweet flavors, and you can find several types of Jaggery with different colors and flavors. Choose one of them to heat it. Keep the flame low, and see it turning into a brown syrup. It can replace the same amount of Molasses.

We teach you how to use melted Jaggery as a substitute for Molasses. However, if you have a creative mind like a master chef and don’t want to stick to a single flavor, you can add more ingredients to the Brown Syrup prepared from the Jaggery. Try adding one-half cup of honey and one-half cup of brown sugar syrup to one cup of jaggery Syrup. The mixture tastes well, and one cup can quickly replace one cup of Molasses. Hence, you should try this at your home and let us know how it turned out to you.

Have you ever thought you would increase the amount of your favorite and delicious Molasses? Yes, it is possible through the following process, and it tastes good. You can have some fun while mixing up stuff. Instead of using Molasses as sole, you can try mixing a few ingredients. For example, take one cup of Molasses, add one-half cup of honey, and one-half cup of brown sugar. The other best mixture is one-half cup of dark Corn Syrup and one-half cup of maple syrup. These work well!

To substitute Molasses this way, you need a three-fourth cup of granulated sugar and one-fourth cup of water. It can perfectly replace one cup of Molasses for any dish. The sugar content of this mixture adds sweetness to your recipe, and water adds moisture. Of course, it doesn’t make your dish delicious and flavored. But when you don’t have time to find other substitutes, it is a good choice.

Have you chosen your preferred Molasses Substitute? In this article, we have summed up with the list of the top 10 best Molasses Substitutes that you can try to replace Molasses when you have run out of it. Therefore, if you enjoyed this list, you can share it with people and let them try these substitutes too.